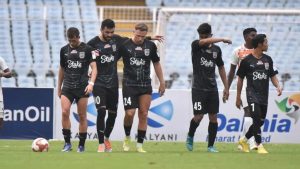 Mumbai City FC beat the Indian Navy FT 4-1 in their first match at the 131st edition of the Durand Cup. The resounding win was the perfect start for the competitive 2022/23 football season for Mumbai City FC. The Islanders looked extremely comfortable on the ball as the Indian Navy FT were too passive in the game and paid the price.

The Islanders started the game on the front foot as they looked to pin the Indian Navy FT back in their half. Mumbai City FC put relentless pressure on the defence of their opponents to constantly looking to penetrate their defences.

Bipin Singh delivered a sumptuous cross from the left but Vikram Partap Singh missed a great chance to take the lead in the 4th minute of the game as the intentions of the Islanders were clear from the first whistle for everyone to see.

In the 14th minute, Greg Stewart triggered a magnificent move, but Indian Navy goalkeeper’s Vishnu made an acrobatic save to deny the Scottish attacker his first competitive goal for Mumbai City FC.

The next big chance for Mumbai City FC came in the 29th minute of the game for Bipin, who found himself on the end of a superb Mumbai City FC team move unfortunately the winger could not capitalise as he shot just wide. Another superb opportunity for Mumbai City FC went begging as they were clearly dominating the Indian Navy FT.

However, the Islanders conceded the first goal of the game in the 43rd minute against the run-of-play as Adersh M, rifled a shot past Lachenpa into the right bottom corner from about 25-yards.

Vishnu in the Indian Navy goal was standing strong as he constantly kept denying Mumbai City FC players a chance to equalise. But in the 49th minute Vikram was able to beat Vishnu as he equalised for the Islanders just before the stroke of half time. He smashed the ball at the back of the net from a close range, to make sure the Islanders went into the break with the scores level.

The Islanders started the second half in similar fashion as they looked to take the lead early on in the half. In the 55th minute Bipin delivered an impeccable cross from the left but Vikram failed to keep it on target as the scoreline remained 1-1. Mumbai City were finding it very easy to create big chances against a lackluster Indian Navy Football Team and in the 59th minute Jahouh found Vikram on the right who delivered a phenomenal cross but Bipin was not able to connect cleanly and the game stayed at 1-1.

Eventually in the 65th minute Mumbai City FC’s relentless pressure resulted in a penalty as an Indian Navy defender tripped Alberto Noguera inside the box. Greg converted the penalty with ease to give Mumbai City FC a very well-deserved lead. Despite chasing the game at 2-1 the Indian Navy Team struggled to find an attacking gear to push the Islanders back.

Instead, Mumbai City FC’s game play became even more expansive as they looked to score more goals before the final whistle. In the final 10 minutes the Indian Super League outfit looked destined to score their third goal of the match as in the 70th minute, Jahouh found Rahul Bheke with a great free kick, but Bheke’s header was well saved by Vishnu. Indian Navy FT were struggling to keep up with the well-coached side as Des Buckingham’s team played some flawless football at multiple points during the game.

Finally, Mumbai City FC did score their third goal of the game as substitute Lallianzuala Chhangte in the 89th minute fired the ball into the right bottom corner after beating the defenders with superb stepovers which was followed by a classic finish. He went on to score his second goal of the game in the 91st minute of the match. The fresh Chhangte maximised after Gurkirat did all the hard work. The game ended 4-1 as Mumbai City FC recorded a sensational victory against Indian Navy FT in their first match at the 2022 Durand Cup.

The Islanders will take on ATK Mohun Bagan in their second match of Durand Cup 2022 on Wednesday, August 24.