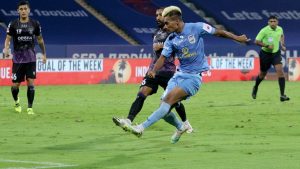 In a must-win game, the Islanders made four changes to their starting lineup. Bartholomew Ogbeche, Bipin Singh, Mehtab Singh, Vignesh D were in the playing eleven for the Islanders. Playing for pride, the bottom of the table side Odisha FC made six changes as they started with Kamalpreet, J Tratt, Bodo, Paul, Jerry, and Vinit.

As expected, Mumbai City FC had more possession right from the kick-off. But the Islanders faced a setback in the eighth minute after giving away a penalty to the home side. Despite not making the best of the attempt from the spot-kick, Mauricio managed to find the back of the net to help his side go 1-0 up inside the first 10 minutes of the play.

Jahouh redeemed himself in the 13th minute with a brilliant delivery to find Ogbeche from a set-piece. The Nigerian found the back of the net with an excellent header and levelled things up in less than five minutes after conceding the opening goal.

Mumbai City FC were in total control of the game with 77% possession in the first 15 minutes. The visitors thus had two important goal-scoring opportunities in the space of four minutes. First, it was a brilliant save by Arshdeep Singh in the 17th minute to deny Adam Le Fondre. It was followed by some great football in the 20th minute by Cy from the right flank, he sent a through ball to Le Fondre who flashed it across goal to Bipin at the far post but it was perhaps too much on it for Bipin to get to the ball.

Odisha FC’s defence showed a bit of character in the 23rd minute. A crucial corner for Mumbai City FC was cleared away for another corner, this was followed by a counter-attack which was dealt well by Mumbai City FC defence. The home side’s one good play was followed by a forced change as their Captain Steven Taylor who also received a yellow card in the 23rd minute had to come off injured in the 31st minute. He was replaced by Mohammed Sajid Dhot. Vignesh too received the first booking of the match for the Islanders in the 34th minute, he will miss the game against ATK Mohun Bagan due to suspension.

The Islanders changed gears in the final 10 minutes of the first half. Bipin helped the men in sky blue take the lead for the first time from close range in the 38th minute. He was at the right place at the right time after the ball came off the deflection from an Odisha defender.

Mumbai City FC’s onslaught didn’t stop. Jahouh once again produced a brilliant delivery that found Ogbeche right in front of the goal. The Nigerian did what he does best, a clean finish with a header gave MCFC a 2-goal cushion. Things went from bad to worse for the home side as a bad clearance from their defender found Cy Goddard who scored a stunning volley with his left boot as he found the top-right corner to score his maiden ISL goal. Sergio Lobera’s side went into the break with a 4-1 lead.

Odisha FC returned to the second-half with a change. Premjit Laishram Singh replaced Baoringdao Bodo at the start of the second half. The inexperience of Odisha FC’s defence was much evident as Bipin scored his second goal in the 47th minute. Ogbeche set up the goal as he passed the ball to Bipin, who went for goal from inside the box as the ball went past Arshdeep’s body.

For Odisha FC, Jerry had an opening in the 53rd minute but could only find the side netting as the home side’s frustration continued. Rakesh Pradhan earned a yellow card in the 59th min for pulling back Cy.

By the 60th minute, Mumbai City had almost four times the number of passes than Odisha FC. It was only a matter of time that the Islanders went for another goal. Bipin came close in the 61st minute with a header but couldn’t find the target and missed a vital opportunity of scoring the first hattrick of the 2020-21 ISL.

The next 10 minutes of play saw three substitutions, more of Mumbai City FC’s domination and little hopes for Odisha to make any sort of comeback in the game. Pranjal Bhumij was introduced in the 68th minute, he replaced Raynier Fernandes. For Odisha FC, Bradden Inman came in for Paul Ramfangzauva. Bartholomew Ogbeche couldn’t get the hattrick as he was subbed for Vikram Partap Singh in the 79th minute.

A clumsy challenge in the 83rd minute from an Odisha FC’s defender on Vikram Partap Singh rewarded Mumbai City with a penalty. Jahouh from the spot-kick missed the opportunity as Arshdeep made the best save of the match and denied the Islanders another goal.

Bipin Singh, who didn’t get the chance to score from the spot-kick, found the net once again in the 86th minute. He made a good run to pounce onto a rebound and score the first hattrick of the season and make it 6-1.

The win keeps the Islanders’ in contention to win the ISL League Shield and seal qualification to the AFC Champions League. Sergio Lobera’s side needs nothing but a victory to create history and rub shoulders with the top clubs from all over Asia. It was not only a huge win in terms of the scoreline but also a big moral booster for the final chapter that has everything at stake.

The judgement day awaits for the Islanders on February 28 against current league leaders ATK Mohun Bagan.

Previous Hosts Morocco to face Uganda at the U-17 AFCON opener!
Next Qatar & Australia withdraw from 2021 Copa America!