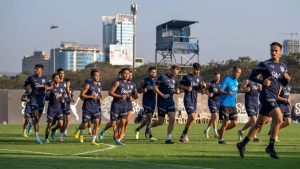 Mumbai City FC are on the road and set to face Odisha FC in their first game of the new calendar year 2023. The Islanders will travel to the Kalinga Stadium in Bhubaneswar on January 2 with action kicking off at 7.30pm IST.

Unbeaten in the 2022/23 ISL season after 11 games, the Islanders have picked up eight wins and three draws and sit second on the league standings behind Hyderabad FC having played a game less. Des Buckingham’s side enjoyed a successful December after a comfortable 4-1 win against FC Goa at the Mumbai Football Arena. The Islanders enjoyed a 15-day break from league action before recording a comprehensive 3-0 win away from home against East Bengal FC, and then wrapped up 2022 with a gritty 2-1 win over Chennaiyin FC on Christmas Eve in Mumbai.

Odisha FC have won six, lost four and drawn one game this season, and currently sit in the final playoff spot at sixth. After a 2-1 win against NorthEast United FC earlier last month, Odisha FC lost 0-3 to FC Goa away from home. They then welcomed ATK Mohun Bagan to home for their next game which ended in a goalless draw. In their most recent ISL fixture, they lost 0-1 to Kerala Blasters FC away from home.

Mumbai City FC head coach Des Buckingham in the pre-match press conference before the away game against Odisha FC talked about how the team is staying focused through this competitive season, “Motivation wise I don’t have to do too much. It’s a very humble and good group of players we have here. They know what we want to do week in, week out and that’s as far forward as we look. So, we’ve spoken about making sure that we start the season well and to put ourselves in a strong position. I am very happy with the performances to date over the 11 games and not just the performances but of course, in the results that have come as part of that and it’s important now as we tip over to the other side of this season that we just make sure we continue trying to get better game by game and that our next game is against Odisha FC and then that will help us hopefully push on to where we want to go. ”

He went on to talk about how the squad will approach the away game against Odisha FC, “Whether we’re playing Air Force in the AFC Champions League or it’s just playing Odisha FC away we know it will be a challenging game, but our approach doesn’t change. We will go and try and play our football and play it to the best of our abilities. Then if we need to manage the game in the game, whether it’s to secure a result or or put ourselves in a strong position by making changes to impact the game, or as it was in the last game, bringing more defensive reinforcements to build the game and that’s something we have the ability to do this year as well, but my approach will never change. It’s to attack to play a very good brand of football and then it’s about managing the game in the game.”

Coach Buckingham was accompanied by midfielder Vinit Rai who spoke about the competition within The Islanders squad, “I’m really fortunate you know to have this competition in my position, because normally when I was in Odisha there was very nice competition in my position. But since I have arrived here, especially this year, we have had so much competition and you know that makes me push harder every training session you know, because I want to make my spot on the team so that I can come and make some impact in the match. Everyone in my position is arguably one of the best midfielders in the league right now in the squad so you know if one is having an off day then another one of us as you have seen in earlier games will step up to help the team to have an impact on the game. So, I think. And that’s what we really keep pushing each other in during the training and in the match. ”

Buckingham ended the press conference by talking about his favourite memories of the year 2022, he said “I’ve got two or three. The AFC Champions League is a wonderful memory that well I would take for me for life. To be able to go to that level of competition and to play the football that we did to come away with two wins and a draw against some of Asia’s best clubs and to showcase what Indian clubs and Indian players certainly can do on that level, it was such a proud moment to stand on that sideline and I know we had the full support of the other fan bases across the country and you know, obviously they’re representing not just Mumbai but India was something I’ll take with me for life that was very special”

“So far this season, it has to be Bipin Singh’s header against NorthEast United FC and I’ll tell you why. We had a wonderful celebration at the end, but since I’ve arrived here, I’ve been telling Bipin to arrive in certain positions and I’ve told him for 14 months that if he gets into these positions he will score with his head, but he needs to be brave enough to put his head there. It’s been 14 months in progress, so when he scored that header, that allowed us to go 2-1 up and then go on to win the game, 3-1 that was fourteen months’ worth of work, and a very nice moment to share with an individual player,” added Buckingham.

The game will kick off at 7:30 pm IST and will be broadcast live on the Star Sports Network, Hotstar, and Jio TV for all viewers in India.