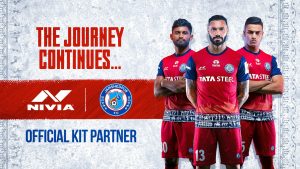 One of India’s leading sports brand, NIVIA, will continue their association with Jamshedpur FC as the Official Kit Partner of the club for another two years, starting from the 2021-22 season. The club and the sports apparel brand have forged a strong partnership with each other since the club’s formation in 2017.

Both Jamshedpur FC and NIVIA have put in massive efforts over the years to engage with the fans, with the club’s different varieties of jerseys being worn in every corner of the city. From 4-year-old kids in grassroots schools to the common men and women of Jamshedpur, a mass of supporters have engaged with NIVIA and Jamshedpur FC via various activities.

On renewing the association, Jamshedpur FC CEO Mukul Choudhari said, “NIVIA is a world-class brand and we are proud of this partnership. Speaking about myself as well, I have grown up using NIVIA products too and the sports fanatics in the country consider it as one of the most trustworthy brands. They are the leading sports brand in India, and with them, we are on our way to forming one of the longest football club kit partner associations in Indian Football. Both brands have engaged well with the supporters in the last 4 years, and we are looking forward to another 2 years with them.”

NIVIA Sports comes under the ownership of the parent company, Freewill Sports Pvt. Ltd., which was formed 87 years ago in 1934. The indigenous brand has made a strong mark in Indian as well as Asian sports. It is the most widely reached and trusted Indian sports brand. NIVIA’s impact in the sporting ecosystem of India has been such that in every corner of the country, be it urban or rural, the sports fanatics are well aware of the brand and get set to play with NIVIA.

Rajesh Kharabanda, Managing Director – NIVIA, was glad to continue this vibrant association as he said, “For us at NIVIA, it’s a no-brainer. With Jamshedpur FC, we have polished an amazing partnership over the years. When the club was established in 2017, the association formed back then was with the view of having it for a long-term and we are glad to be on board with the club for another two years. The club has the ambition to succeed and we want to be part of that journey with them.”

The entire set of apparel worn by Jamshedpur FC and its youth teams and grassroots schools is produced by NIVIA and the same will continue with the extension of this partnership. The sports brand will also feature Jamshedpur FC apparel in its Club Merchandise section in the coming days as well.

Previous Bengaluru FC VIDEO: It’s Training Men with #BFCTV!
Next Gary Hoffman will step down as Chair of the Premier League!

FK Željezničar, the top club in Bosnian football, who play in the Premijer Liga of …