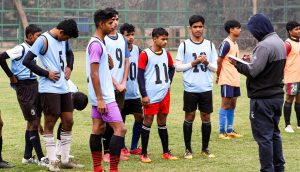 Jamshedpur FC recently called for online registrations for its U-17 (Tata Football Academy) team which were met with stupendous success. A remarkable 2,713 players registered from across India including both online and offline registrations.

The registrations were organised online and offline and were open for all eligible candidates born between January 1, 2006 and December 31, 2007, subject to a strict age verification process and examination of appropriate documentation.

“TFA has consistently set the standard for quality in training the next generation of footballers and that is evident by the high number of registrations for the U-17 trials,” said Jamshedpur FC CEO Mukul Choudhari.

“I want to thank all those who have registered themselves for the trials at TFA and wish them the very best for the upcoming open trials in February.”

The trials will be held between February 1-8, 2023 at the Tata Football Academy football ground in Jamshedpur, Jharkhand. These trials will be free of cost and open to all registered candidates across the country of India.

If shortlisted, the candidate will receive a notification via phone and email following the trials and if chosen will be eligible for a full four year scholarship to train with the club.