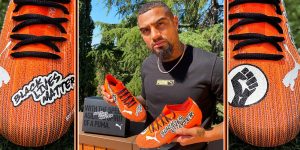 The #REFORM initiative was established in October 2018 to commemorate the 50th anniversary of track-and-field athlete Tommie Smith’s silent gesture. It was born of a desire to come together to take a stand for universal equality.

Grounded in three core pillars—ending racial, LGBTQ+, and gender discrimination— #REFORM drives and advocates for social change. By partnering with communities, like-minded activists, and organizations around the world, PUMA can take action to make a difference, together.

Kevin Prince Boateng has continued to push for equality and change following his own experiences of racism on and off the pitch. Kevin reached out to PUMA to collaborate on this special boot and to discuss ways to help drive social change in football and society.