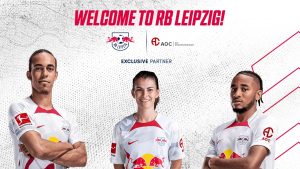 The property developer from central Germany will be the “exclusive partner” and the sleeve sponsor on the RB Leipzig men’s and women’s jerseys.

Ahead of RB Leipzig’s Supercup clash with FC Bayern Munich, the club have announced a new partnership with “AOC | Die Stadtentwickler GmbH”.

In the first two years of the partnership, AOC will be the sleeve sponsor of the RBL jerseys for the men’s and women’s league matches. The AOC badge will make its debut on the RBL jersey this Saturday, when Leipzig take on FC Bayern in the Supercup.

Furthermore, as part of the partnership, the VIP area on floor 5 of the Red Bull Arena will carry the name “AOC Stadionblick” and the company name will be displayed on the LED boards around the ground on Bundesliga matchdays.

Oliver Mintzlaff, chairman of the management board at RB Leipzig, said, “It’s been important for us to set out our partnership with ‘AOC | Die Stadtentwickler’ in time for the start of the new season and to have AOC as our sleeve sponsor. AOC is a company from central Germany with many projects in Leipzig and we are very much looking forward to a creative and constructive partnership.”

Till Schwerdtfeger, managing director of AOC | Die Stadtentwickler, said, “RB Leipzig’s journey is a unique success story. We are proud of this cooperation here at AOC | Die Stadtentwickler and we are looking forward to taking the next steps together. Sports sponsorship has always been an objective here at AOC, and the fact that we are now an exclusive partner of RB Leipzig represents the logical continuation of the great developments we have made over the last few years.”

Atlético Madrid have announced a new partnership with the world’s leading VPN provider, NordVPN. This …