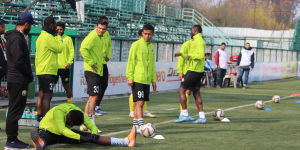 Real Kashmir FC will face the challenge of TRAU FC in their I-League 2022-23 fifth-round fixture at their fortress, TRC Stadium in Srinagar on Thursday, December 1.

Following their narrow 1-0 win over Churchill Brothers on Monday, Real Kashmir have now moved into double figures with ten points on the table. The Snow Leopards remain the only team in the competition who are yet to concede a goal. TRAU FC had a reasonably decent start to their campaign with a draw against Aizawl FC and a 3-0 win over Mumbai Kenkre FC, however, the Red Pythons have lost their rhythm after succumbing to 1-0 defeats on their two previous outings against Sreenidi Deccan and Mohammedan Sporting.

History, though, is on TRAU’s side. The Imphal-based side have never lost to Real Kashmir in their five I-League meetings, with four draws and a victory thanks to a famous hat-trick from Bidyashagar Singh in the 2020-21 season. The Snow Leopards tasted success versus Churchill Brothers for the first time and will be hoping to do the same against TRAU with the support of their noisy home fans.

At the pre-match press conference, highlighting the importance of tomorrow’s game, the home team’s head coach Mehrajuddin Wadoo said, “TRAU are a good team, they have had good results and it’s going to be a really competitive game. For us, it’s important because we are on top of the table and to maintain that, we need three points tomorrow.”

Samuel Kynshi, who played a sporadic role for Real Kashmir last season has been one of their key players this campaign. On his team’s great start, Kynshi said, “The mood is really good in the dressing room, we have been working hard on the pitch and all the players are ready to perform. I think we will do really well if we can maintain this momentum and work hard on the things the coach tells us.”

TRAU FC head coach L. Nandakumar Singh informed that Ghanaian striker Nana Poku, who has a goal and an assist to his name this season won’t be featuring on Thursday. “Poku has faced an injury and won’t be in the starting list tomorrow,” Nandakumar said.

On their upcoming opponents, Nandakumar said, “Real Kashmir are now at the top of the table and they are a really good side, so I am expecting a tough and a high-intensity match tomorrow.”

“This will be our third away game,. We have played in Hyderabad, Kolkata and now in Kashmir. Adjusting to the weather here has been a little difficult for my boys but we will give our best.” On TRAU’s previous results he added, ”Against Mohammedan, I think we played really well. The boys fought till the end but ultimately a single mistake cost us the game. The same happened in Hyderabad too. We are trying to stop and minimise these errors.”

Midfielder Gérson Fraga Vieira agreed with his coach’s comments and displayed a positive outlook. “It’s very difficult to play away, especially against a team with good momentum. We know it will be difficult but I think we can come here and perform well to get a positive result tomorrow,” the Brazilian said.

The match between Real Kashmir FC and TRAU FC will kick off at 2pm IST, and will be broadcast live on Eurosport and Doordarshan Sports, and streamed live on the Discovery Plus OTT platform.