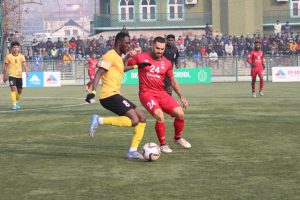 Real Kashmir continued their unbeaten run in the 2022-23 I-League with a 1-0 win over Churchill Brothers at the TRC Stadium in Srinagar on Monday, November 28.

A second-half header by the substitute Ibrahim Nurudeen proved enough for the hosts as they defeated Churchill Brothers for the first time in the I-League.

Churchill Brothers maintained possession right from the first whistle, however, the first major chance of the game fell for the home side at the quarter-hour mark as midfielder Yakubu Wadudu’s shot was deflected onto the post by goalkeeper Albino Gomes.

In the 18th minute, Real Kashmir’s Lalnuntluanga Bawitlung took a powerful shot from 30-yards out but the Churchill Brothers custodian Albino Gomes made a great save, diving to his left to keep the ball out of his goal. The 28-year-old was called into action again in the 34th minute, making another acrobatic save, this time from Samuel Kynshi’s effort.Five minutes before the half-time whistle, Tana curled in a corner for the visitors, which was punched away by Subhasish Roy Chowdhury in the Real Kashmir goal. The Snow Leopards launched a promising counter-attack from the resulting clearance as Jerry Pulamte sent Kynshi through on goal with a neat pass. Albino Gomes stood strong for the Red Machines once again, pulling off two saves in quick succession to deny the hosts the opening goal.

The second half began with Real Kashmir charging at the Churchill defence. Two minutes after the restart, Pulamte got a shot away from the top of the penalty area but it was comfortably collected by goalkeeper Gomes.

At the hour mark, Joseph Clemente fouled Kynshi just outside the penalty area. Nozim Babadzhanov took the resultant free-kick but his effort hit the wall and went out for a corner. Five minutes later, Pulamte received a great through ball from Wadudu before sending a cross in for Issahak Nuhu Seidu but the Ghanaian failed to get a clean connection and Churchill Brothers custodian Gomes collected the ball.

The Churchill Brothers defence was finally breached in the 76th minute as Gomes’ parry from the corner kick dropped for Bawitlung at the edge of the box, who lobbed it back into the box for substitute Ibrahim Nurudeen to head home.

The visitors later received many opportunities to come back into the game with both Tana and Cissé taking free kicks just outside the Real Kashmir penalty area but their efforts were well off target. It just wasn’t Churchill Brothers’ day as they finished the game with no shots on target.

With this result, the home side remained at the top of the table with 10 points from four games (three wins and a draw), while the Goan side have just a single point from their four outings.