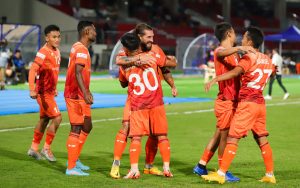 First half strikes from Luka Majcen and Samuel Lalmuanpuia were for the home side to clinch the three points, with Sreenidi defender Shahabaaz Khan scoring in the 58th minute.

The first half began on a tentative note as both teams looked to enter their respective passing rhythms. Attacks were few and far between in the opening 15 minutes.

The home side started to dominate the exchanges eventually and the first major chance came in the 21st minute after a free-kick from the left flank was headed towards his own goal by Sreenidi Deccan FC defence, which had to be cleared off the line at the last second.

Two minutes later, RoundGlass Punjab FC’s pressure paid dividends. A quick throw-in from the right flank found Brandon Vanlalremdika in space inside the penalty area. He chipped a cross in for Majcen and the Slovenian marksman smartly placed it beyond the keeper via his near post.

The Punjab side continued to create waves of attack, with Majcen’s shot from close range blocked on the goal-line in the 38th minute. However, he was narrowly offside as well while receiving the ball.

With two minutes of the first half left to play, RoundGlass Punjab FC doubled their lead through Lalmuanpuia. After Majcen was brought down at the edge of the penalty area, the midfielder took the free-kick and placed it over the wall and past the goalkeeper, much to the delight of the home fans.

The best chance of the half for the visitors came at the half hour mark after a free-kick from the right flank posed questions of the defence but Adnan Secerovic was on hand to clear in time.

The away side looked to switch things around in the second with attacker David Munoz coming on as a substitute. They created an opening in the 54th minute as Louis Ogana played a low cross from the right, which was collected safely by Kiran Limbu.

Sreenidi, however, continued to press and halved the deficit in the 58th minute. Gabriel’s cross was palmed away from goal by Limbu, and Khan got his head to the loose ball first and put it into the net.

The match grew in intensity and RoundGlass Punjab FC came close to finding their third goal in the 68th minute. Krishnananda Singh won the ball high up the pitch and charged towards the by-line from the left wing but his cross was inches away from finding Majcen.

Six minutes later, the striker almost played in substitute Pranjal Bhumij on a fast counter-attack but his pass was inaccurate and collected by Sreenidi keeper Aryan Lamba.

The Hyderabad-based side piled on the pressure in search of the equalizer towards the end, but the Punjab backline thwarted their attempts. Substitute Songpu Singsit fired in a long ranger with six minutes left to play, but it flashed narrowly over the bar.

The score remained the same as the referee sounded the final blow of his whistle after six minutes of added time. A determined RoundGlass Punjab FC collected all three points despite a strong second half performance by Sreenidi Deccan FC.