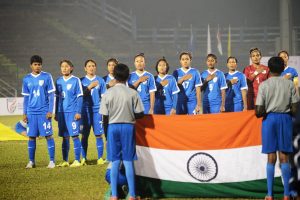 The defending champions and hosts India were held to a goalless draw by Bangladesh in their second and final Group B league match of the ongoing Women’s SAFF Championship at the Kanchenjunga Stadium in Siliguri on Saturday, December 31.

Courtesy the result, India finished second in Group B behind Bangladesh and will now play strong contenders Nepal in the first semifinal on January 2, 2017. Bangladesh who finished on top of Group B will play the Maldives in the other semifinal on the same day.

“The girls displayed a good brand of Football but we were not able to convert the chances that came our way,” Head Coach Sajid Dar said after the match.

“We were denied by the post thrice in the match while their Goalkeeper was brilliant in some one-to-one situations,” Sajid, who guided India to the Gold Medal in the South Asian Games in February 2016, added. “It was one of those matches where we didn’t have any luck on our side.”

Now India have a day’s rest and then face Nepal, who have been impress in the tournament so far.