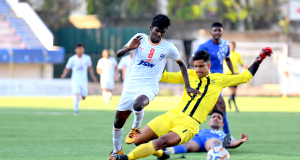 An injury time strike from top-scorer Shivasakthi gave Bengaluru FC a 1-0 win over MEG & Centre, at the Bangalore Football Stadium on Thursday. The result sees the Blue Colts leapfrog FC Bengaluru United to go top of the BDFA Super Division League table with two games left to play in the competition.

In what was an evenly contested first half, both teams fought hard to assert themselves on the game throughout the opening half hour. Chances were at a premium, and it was the Blue Colts who went close to getting the opening goal on three separate occasions through Shivasakthi.

First, the no. 9 managed to wriggle past multiple challenges and beat MEG custodian Pramod Joshi with a low shot, only to see the ball bounce off the far post. Moments later, Damaitphang Lyngdoh won the ball in the middle and picked out Sivasakthi’s run into the box but the striker’s shot sailed inches wide of the far post. The Blue Colts striker saw a third chance go begging when his attempt to divert goalward from Jagdeep’s low cross went wide of the mark.

The second half saw MEG start on the front foot, and the Blue Colts defended in numbers to keep the game goalless. ’Keeper Sharon Sivan pulled off two fantastic saves, first tipping Shubham Rana’s shot over the bar and then getting his hand to Imnaakum’s effort from close range.

Pushing forward with intent, Bengaluru found their goal deep into injury time when Shivasakthi got to the end of Omega Vanlalruaituanga’s ball over the MEG backline. Having beaten defender Nitin with his first touch, the 19-year-old rounded Joshi, who had made his way out of the box, and then kept his composure to finish low past stranded MEG defenders to give the Blue Colts the win with what was the final attack of the day.

Bengaluru FC are back in action on March 8 when they take on FC Bengaluru United at a title deciding clash. A win on Monday will hand Bhoite’s side the title with an unassailable lead atop the standings.