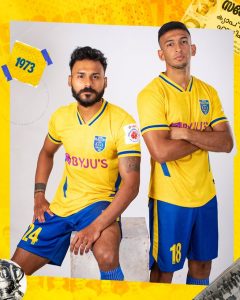 Kerala Blasters FC has launched their first kit for the upcoming 2021/22 season of the Indian Super League. The first kit is devoted to the 1973 Kerala Santosh Trophy squad who brought the first-ever Santosh Trophy championship to the soil of Kerala. To celebrate the 1973 triumph and to honour those veterans, 1973 will be written on the nape of all jerseys. This kit will be donned by all Kerala Blasters players for the home matches in the coming ISL season.

Yellow remains emboldened in this first kit as well, as it represents team’s strong passion for football and also symbolizes their pride to be one with Kerala in reinforcing the State’s legacy. Along with this unchanged yellow, the Komban is also maintained as it signifies the pride of Kerala Blasters. The blue colour on the sides of the jersey represents the tusk of the Komban, and the skin pattern is inspired by the shape of the Komban’s eyes. This skin pattern is made more angular for a global and minimal appeal.

Ambar Aneja, CEO Six5Six said, “It’s been an honour to be a part of this historic partnership and to honour heroes that have had an incredible impact on the game of football in Kerala. This Jersey is an ode to all of that and more.”

Kerala Blasters FC’s director Nikhil Bhardwaj said, “This one is special for me because when we made a commitment to the development of football in the state of Kerala we knew that we had a rich legacy that we had to honour. This year when we wear the Yellow Armour we will take with us the spirit of the Class of 1973. #ForOurLegends.”

The club will reveal the second and third kits prior to the commencement of 2021/22 ISL.

For Kerala. For Our Pride. #ForOurLegends. 🏆