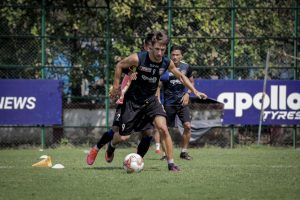 Eighth-placed Chennaiyin FC go up against seventh-placed Jamshedpur FC at the GMC Stadium in Bambolim on Wednesday night, with just one point separating the two outfits. With four league games left to play, both teams are still very much in contention for the play-off places, with six points separating Chennaiyin FC (17 points) and Hyderabad FC (23 points), who occupy the last play-off spot in fourth.

A first win after five games without one will come as a welcome development for Chennaiyin FC, as they aim to chart a late surge to one of the three remaining semifinal spots late in the league stages for a second season running. A double against Jamshedpur FC is the bare minimum they will be hoping for, as they face-off against their opponents after the opening night of the season, when goals from Anirudh Thapa and Isma Goncalves were enough to give Csaba Laszlo’s Marina Machans a 2-1 victory.

Chennaiyin FC looked dangerous in the goalless draw against Bengaluru FC in their previous game, with new signing Manuel Lanzarote (Lanza) pulling the strings ably in midfield. Laszlo’s side was also boosted by the return of central defender Enes Sipovic from suspension and Thapa from injury, the latter playing the first half against Bengaluru FC before being substituted. Laszlo did confirm that the India international is available for selection against Jamshedpur FC. He will however miss the services of left-back Jerry Lalrinzuala, who picked up his fourth yellow card of the season and will now be suspended against the Red Miners. The experienced Chhuantea Fanai is expected to start in his place, as per Laszlo in his pre-match press briefing.

Chennaiyin FC looked a lethal force with the injection of Lanza’s creativity, but the forward line of Isma Goncalves, Lallianzuala Chhangte and Rahim Ali failed to convert the many chances created. They will have to up their game and help notch up a few wins if they are to stand a chance of qualifying for the play-offs. It hasn’t helped being the league’s lowest goalscorers with just 11 strikes so far for Chennaiyin FC.

At the other end though, they have looked solid defensively, keeping a sixth clean sheet of the campaign against Bengaluru FC. Their aim will be to produce more of the same as they hope to keep out a familiar face in Lithuanian striker Nerijus Valskis, who won the Golden Booth playing for CFC during the memorable 2019-20 season with current Jamshedpur FC head coach Owen Coyle at the helm.

Speaking of familiar faces, a former Jamshedpur FC player has been among Chennaiyin FC’s standout performers in an otherwise inconsistent season. The versatile midfielder-cum-defender Memo Moura has been a dependable force for Chennaiyin FC, having joined after three seasons at JFC. The Brazilian has seamlessly slotted into midfield and at the back when required, carrying out an efficient job at both ends of the pitch. He came the closest against Bengaluru FC from a thunderous free-kick, and will dearly be hoping to get one over his former employers.