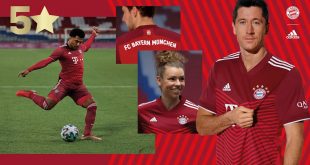 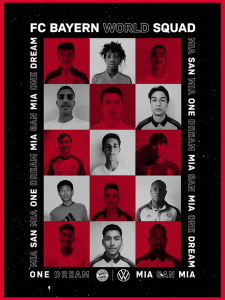 Young football players everywhere dream the same dream of becoming a professional. FC Bayern want to support them – and have set up a U19 team with talents from all over the world.

Klaus Augenthaler shakes his head. “Giovane, what are you translating? I say two sentences and you speak for ten minutes.” Élber grins and apologetically shrugs his shoulders. He just wants to do it really well and you feel that the young talents are close to his heart. “To get a chance like that is a dream for the lads,” said Élber. What does he mean? The FC Bayern World Squad, a U19 team with 15 players from 15 countries, which the German record champions have put together in cooperation with VW. “Everybody should be able to come in contact with FC Bayern,” explains Christopher Loch who has worked for FC Bayern for many years as the international youth coach. In the summer, providing the coronavirus pandemic permits, several friendlies are planned including the highlight of a match against the FC Bayern U-19 team as part of a training camp in Munich. After an appeal via digital media, over 1,200 video applications came in from 65 countries: from Bangladesh, India, Georgia, Syria and Togo through to Colombia and Canada. 38 lads remain after the final selection phase. Head coach Augenthaler and Loch looked at them at the beginning of May. Élber came in for the candidates from Brazil.

The trio are sat in a meeting room at the FC Bayern Campus. They are looking at the big screen with the young talents brought in one after the other via video calls. Normally, in times without the pandemic, FC Bayern would have gained a first hand view at a trial training session. But now they’d just do scouting via video clips, which are sometimes less than a minute long. How are they meant to make a decision of who makes it into the team and who doesn’t? Loch says you can identify a couple of things from the videos. How does a player move? How fast is he? How does he control the ball? It is also important to look at the opponents. “Because sometimes a player looks good because the opponent is bad.”

The dream of a great career in Europe

It is also important for FC Bayern to speak to each individual candidate. That is possible in spite of coronavirus via digital technology – and that’s why they are sitting together now. “If you look the lads in the eyes then you can see that they really mean it. That they want to make this dream a reality,” said Augenthaler. Where do they play football? Which position? What’s happening at school? And why do they want to be part of the FCB World Squad? Those are questions the candidates answer. “Who doesn’t know Bayern?”, says Diego from Jabotao dos Guarapes in north-east Brazil. For the 16-year-old, it would be “the best thing possible to come to Munich, to get to know a different culture, different language and different training methods.” Augenthaler wants to know if he has ever travelled. Diego shakes his head. “No problem,” says Augenthaler and he starts to laugh: “When I was young I never left Lower Bavaria.” That insight makes a connection: Almost 50 years and over 7,000 kilometres separate the legend and the talent but they do have something in common. “When I was 15 or 16 I also dreamt of becoming a professional footballer,” said Augenthaler. “For many lads football is a way out of difficult circumstances. Those human aspects make the World Squad so world-class.”

Élber also feels close connection to the talents from his home country. “They remind me of myself when I was their age,” said the FCB legend. Élber played for the FC Londrina youth team back then. “One day the president came to me and said that we were going to fly to Milan. I could hardly believe it. I’d only just turned 18 and I hadn’t played a single game in Brazil as a professional – and suddenly I was training with Gullit, van Basten, Rijkaard, Beresi.” Back then it was unusual to move straight from a youth team to a European club without being at a top-flight Brazilian side first. “Today, all young Brazilians want to go straight to Europe,” said Élber, “they mainly watch European football. They know every player at Real Madrid, Barcelona and Bayern but not those from Flamengo or São Paulo.” Neymar and Robert Lewandowskiare role models for Joao. “He didn’t say a word about Élber,” says Augenthaler with a grin. When Élber explains to the 17-year-old from Porto Velho who Klaus Augenthaler is – World Cup winner, seven-time champion of Germany – the eyes of the young Brazilian light up. And if the FC Bayern World Squad do that then they have achieved a lot.

ARD, ZDF and Sky have obtained the rights to broadcast the men’s DFB-Pokal from 2022/23 …