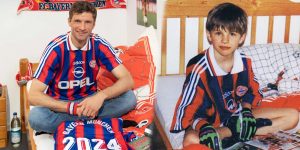 The record champion is staying with the record champions: FC Bayern Munich and Thomas Müller have agreed an early extension to his contract until summer 2024. The 32-year-old attacker has been with the club since the age of 10, progressing through every age group before turning professional in 2008. Bayern’s 10th successive Bundesliga title was his 11th in the red shirt – no other player in the history of the German top flight has lifted the shield more times.

Oliver Kahn, CEO said, “Thomas Müller is an icon who wears the club badge in his heart. FC Bayern has always been characterised by continuity, and therefore we’re pleased that we’ve managed to extend the contract of this important player. He’s someone who assumes leadership and is also an important character in the dressing room with his personality.”

Hasan Salihamidzic, board member for sport, said, “You can’t imagine Thomas Müller without FC Bayern – nor FC Bayern without Thomas Müller. That’s why we’re very happy that Thomas has extended his contract until summer 2024. Thomas is a leader who’s hungry for success, and a role model on and off the pitch who embodies FC Bayern better than anyone.”

Thomas Müller said, “I’m delighted to have extended my contact with FC Bayern Munich until 2024 today. The journey we’ve been on since I joined the FCB academy in 2000 has been a fantastic success story up to now. It gives me immense pleasure to hold up the red colours year after year, on and off the pitch – even if the wind blows in your face from time to time. So, let’s keep going together!”

Thomas Müller, who comes from Pähl am Ammersee near Munich, has won 11 Bundesliga titles, two Champions Leagues, the FIFA Club World Cup and UEFA Super Cup, and the DFB Cup six times with FC Bayern, among other honours. To date he’s made 624 competitive first-team appearances for the German record champions. In 2014 he won the FIFA World Cup with Germany in Brazil.