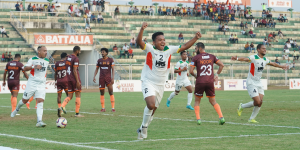 Tiddim Road Athletic Union (TRAU) earned their first away win in the I-League this season, handing defending champions Gokulam Kerala FC their first home defeat in the process, at the Payyanad Stadium in Manjeri on Sunday, January 15.

At the pre-match press conference on Saturday, TRAU coach Leimapokpam Nandakumar Singh talked about the long journey they had to make from Imphal to here. His wards made the journey worth it this afternoon, the best part being the performance of the young guns.

Having been on the receiving end for most of the first half and the first few minutes of second, TRAU took hold of the match in the 57th minute with defender Manash Protim Gogoi’s goal. Gokulam Kerala FC were enjoying more of ball possession and TRAU got a corner against the run of play. Komron Tursunov floated the ball in from the left and the Gokulam Kerala FC defence did not know when Gogoi sneaked in at the far post to head the ball in.

Home coach Francesc Bonet realised the match was slipping away and effected changes in the 64th minute, withdrawing captain Noufal to put Thahir Zaman in. It did not make much of a difference as TRAU pushed harder. Gokulam Kerala FC did create some chances but as in the first half, those were either off target or not good enough to beat TRAU goalkeeper Bishorjit Singh.

On the contrary, The Red Pythons almost doubled the lead in the 76th minute. After a string of passes in the midfield among TRAU players, Salam Johnson Singh’s brilliant through ball from the right found Tursunov in the Gokulam Kerala FC box with only custodian James Kithan to beat, but Tursunov went for the far post and missed it narrowly. However, Johnson did the job himself a couple of minutes later. He owned the right wing with another brilliant run into the penalty area and beat Kithan with a powerful right-footer to make it 2-0.

Gokulam Kerala FC’s foreigners – Omar Ramos, Kaka and Farshad Noor hardly made an impact today and that second goal should have put it beyond the home team’s reach. But TRAU left-back Buanthanglun Samte, who had an otherwise good day, made a terrible defensive error four minutes from time. He was too late to decide on a back pass to Bishorjit, with Kaka’s replacement Shijin breathing down his neck. He got between Samte and Bishorjit, who was also late to reach out for the ball. It eventually fell for Thahir Zaman, who stood in front of an unmanned goal and halved the deficit.

Omar did get a shot at the goal in the very next minute but could not put it on target. The match even ended with Gokulam Kerala FC getting one final corner. It was not a particulary well-taken one but eventually Shijin delivered a cross for Rahul Raju, who headed it way over the bar. It was that kind of a day for Gokulam Kerala FC.

This victory took TRAU to the third position on the table with 19 points in 11 games, while Gokulam Kerala FC dropped to fifth.