UEFA launches an observer programme on standing facilities for fans in the 2022/23 season!

Press Release 2022-07-27 Europe Comments Off on UEFA launches an observer programme on standing facilities for fans in the 2022/23 season! 497 Views 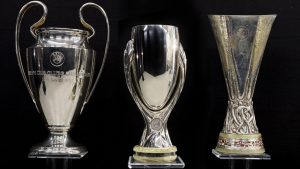 UEFA has announced today the launch of a programme to observe the use of standing facilities for general admission spectators attending matches of clubs participating in its men’s club competitions during the upcoming 2022/23 season.

The study noted the widely different approaches in the application and regulatory framework across countries and sometimes also between regions and cities in the same country. A variety of different technical solutions are also used with significantly different impacts on safety and security management.

With the approval of the UEFA Executive Committee, UEFA is launching the Standing Facilities Observer Programme 2022/23 to observe the use of such facilities in domestic as well as international club competition matches. The objective is to assess if and under what conditions standing may be reintroduced in UEFA competitions in a safe manner.

Given its observatory nature, the programme will be limited, at least in its introductory season, to clubs from the top five associations in the UEFA rankings where standing is already authorised and implemented at domestic level, i.e. England, Germany and France, in compliance with national and local legislation. The programme will be carried out during the group stage and knockout phases up to and including the semi-finals of the 2022/23 UEFA men’s club competitions. The finals are excluded.

UEFA will appoint independent experts to analyse the use of standing facilities at both domestic and international club matches in those countries to assess the different dynamics between national and international supporters and the related safety and security implications.

At the end of the 2022/23 season, on the basis of the reports submitted by the mandated experts, the UEFA administration will assess the findings of the programme and submit the results to the UEFA Executive Committee, which will decide on any continuation and possible extension of the programme.

All operational-related details about the programme will be shared with the clubs concerned in due course.

RB Leipzig have added an exciting teenage talent to the squad, completing the signing of …