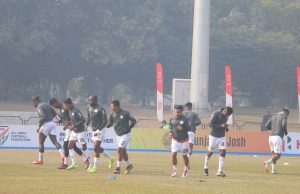 The year has not started well for either Churchill Brothers or NEROCA FC. The former lost to defending champions Gokulam Kerala FC after a close fight in this year’s first match, while the Imphal side could not keep up with a clinical RoundGlass Punjab FC. Khogen Singh’s men are now in the relegation zone while the Goan club finds itself in the eighth position with 12 points from ten matches. Therefore, both teams will be looking for three points at Tilak Maidan here on Thursday. That would give NEROCA hope for survival, Churchill Brothers a place among the top six.

Leaky defence has been the problem for both coaches. Fernando Varela’s boys have conceded 11 goals while Khogen’s team has conceded a dozen. But the difference lies in utilising the scoring opportunities. Even though Churchill Brothers failed to score against Gokulam in the last match, they have scored 15 goals before that. Their Senegalese forward Abdoulaye Sane alone has scored four, while the entire NEROCA squad has scored just five in ten matches. The inability of the likes of Jourdain Fletcher and Michael Kporvi to convert chances hurt them in the last match, too. Those forwards will have to pull up socks to make a match of it against Churchill Brothers. Otherwise, it may get too late for the hill side.

The NEROCA defence consisting of David Simbo, Thokchom James Singh will also have their task cut out against Churchill Brothers’ attacking prowess. Gokulam owed their win over Churchill to a large extent to their defence led by captain Aminou Bouba. Containing the forward line of Sane and Spaniard Tana will be a tough ask for Simbo & Co., too. The way RoundGlass Punjab toyed with NEROCA’s defence in the first few minutes of their match cannot be allowed to happen again.

NEROCA coach Khogen, speaking on the eve of the match, sounded realistic, saying “We are still off the track, so the first target is to return to the track, then take it from there.” However, he said the side is made up of young and inexperienced footballers, therefore “small mistakes at crucial moments” were making the difference. “We’re not behind my much,” he maintained. He also refused to read too much into Churchill’s defeat to Gokulam because “most of the teams are of similar standard and small things here and there make all the difference.”

Churchill Brothers boss Varela agreed that his team was in control against Gokulam most of the time. To ensure the mistakes of that match are not repeated against NEROCA, “we have to be more alert and assured at all moments,” he remarked.

Since it will be Churchill Brothers’ first home match in the New Year, he said “It feels good to play in front of people who we represent. Hope it’ll be a good experience for them.

Talking about Thursday’s opponents, he said “NEROCA are a competitive team and they have good Indian players as well as quality foreigners in their ranks. But they have not won many matches, so will be going for full points. We have to be very careful.”