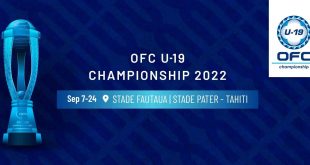 OFC U-19 Championship Quarterfinal schedule out!

The Oceania Football Confederation has confirmed today the venue, match dates and kick-off times for the OFC Futsal Cup 2022 development tournament, which will be held between September 13-18.

The group stages will be played in a single round-robin where each team plays one match against the other teams in the same group, with three points for a win, one point for a draw and none for a defeat.

The group winners and runners up will contest a semi-final each on Saturday, September 17, with the winners advancing to the Futsal Cup final on the Sunday.

All 20 matches will be livestreamed and available to watch free on the OFC website via Eleven Sports.

“In Fiji, there’s been a boost of popularity in futsal after the lockdowns caused by the COVID-19 pandemic.” Jankowski said.

“A few weeks ago, we had a youth futsal tournament for boys and girls it was aa big success.

“We’ve entered two teams into this competition which presents a big opportunity for the next generation of players coming through to be amongst and against those with more experience.

“Everyone is looking forward to the tournament.”

Details for the draw to be announced.