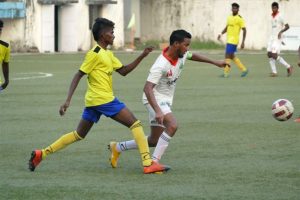 The Flaming Oranje now jump to second position with 19 points from 9 matches while Panjim Footballers are on 10th spot with four points from seven matches.

Victorino Fernandes score two in the first half while he netted the third in the second half. Cajetan Fernandes was the other goalscorer.

Sporting Clube de Goa didn’t take long before taking the lead as Victorino Fernandes capitalised on a defensive lapse when the Panjim Footballers defence failed to deal with Clive Miranda’s long throw in. The former FC Goa striker made no mistake to shot from close, 1-0.

Sporting Clube de Goa doubled the account in the 28th minute and this time it Cajetan Fernandes who met Clive’s throw in to inflate the lead.

Sporting Clube de Goa played more relaxed game as their defence led by Clemente was outstanding throughout the game and commanded the play.

Victorino scored the team’s third and completed his brace when his placement shot had no answer from the rival keeper. The winners led 3-0 at the break.

Crossing over, Sporting Clube de Goa netted their fourth and Victorino competed his hattrick when he was played through on goal by Cajetan, whose defence splitting pass broke the Panjim Footballers defence and Victorino showed his composure before slotting him, 4-0.

“It’s good to be back and scoring three means good but the team’s win is more important. I hope we continue to put up such performance,” added the hattrick Sporting Clube de Goa Victorino Fernandes.