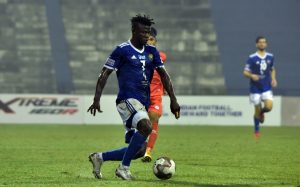 Much like the I-League table, the top scorers’ chart is as close as ever as we near the end of the first phase of the competition. The latest player to join the fray in the frantic race for the prestigious award is Real Kashmir’s Nigerian striker Lukman Adefemi.

The 26-year-old announced his intent with a hattrick in his side’s thrilling 4-3 victory over NEROCA FC earlier this week. Lukman is currently joint-second with four goals, alongside Komron Tursunov of TRAU FC, and Chencho Gyeltshen of RoundGlass Punjab FC, just one behind Clayvin Zuniga of Churchill Brothers.

Looking back upon his stellar performance in the match against NEROCA FC, Lukman stated that the fans of Real Kashmir motivate him to go out there every match and score the goals.

In this interview, the 26-year-old opens-up about this move to India, and what motivates him to score goals.