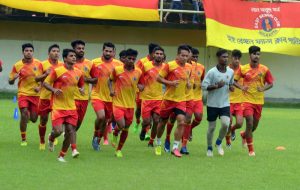 Calum Angus landed in the city last midnight to play for East Bengal in the CFL. Calum has last plied his trade for Dempo SC and Pune FC in the I-League. Actually, a central defender Angus has also got the ability to score goals from dead ball situations as he is capable of scoring goals from the free kick and corners.

On the other hand, East Bengal’s Korean missile Do-Dong-Hyun too landed in the city last night at midnight. Dong, who is on a one-year contract with the Red and Gold was stupendous in the CFL last season scoring 10 goals in 12 matches for the Red and Gold brigade with a brace against Mohun Bagan in his maiden derby.

Both players want to win the CFL first and then try to win I-League as well!