Anas Edathodika comeback a boast for India ahead of Oman tie!

Press Release 2019-11-18 Asia, Team India Comments Off on Anas Edathodika comeback a boast for India ahead of Oman tie! 259 Views 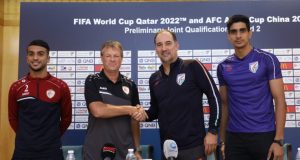 India head coach Igor Stimac praised the ‘character’ of Anas Edathodika, who despite losing his mother, has opted to join the Blue Tigers two days before they face-off against Oman at the Sultan Qaboos Sports Complex Stadium in Muscat, Oman on Tuesday, November 19. The match will kick-off at 8:30pm IST (7pm local time).

“We suffer from time to time when players get injured or due to other problems. He (Anas) had to leave the camp and go back before the Afghanistan game, as his mother passed away,” said Stimac.

The gaffer continued, “But I want to mention that he has come back to serve to country. I have players like him in our team and I’m proud of them. His return boosts the team.”

“I was very sorry to hear about his loss, it is a difficult time for him and his family. My prayers are with him. His commitment to the National Team is unparalleled and something that fuels our desire to go out there and play our hearts out,” Sandhu expressed.

India skipper Sunil Chhetri indicated that “staying with the team and playing” might help him come out of these tough days.

“It is pure strength shown by our experienced Anas-bhai. I can only imagine how difficult it must be for him and the grief inside him. I hope staying with the team and playing football helps him in the process,” an emotional Chhetri stated.

Meanwhile, coach Igor Stimac wished the Omanis on the auspicious occasion of National Day as well as affirmed that the team has come here “to win”.

“I would like to take the opportunity to wish all my Omani friends present here on their National Day. It is our privilege to come now and play the game,” he said.

“Wherever you go, the intention stays quite clear, you go to win it. We have come here to win as well. We have great respect for Oman, who are a very good side. We have faced them in Guwahati a few months back where they have shown their real capacity,” Stimac continued.

Gurpreet Singh Sandhu, while addressing the media, mentioned, “We have come here to play to the best of our capabilities and make sure we stay tough as a team. Oman is a difficult team to play against. In recent years, we have grown up as well. We will have to go out with all the strength we have and try to get a positive result.”

Gurpreet showed his mutual respect for Oman goalkeeper Ali Al-Habsi and mentioned that the former Wigan Athletic and Bolton Wanderers goalkeeper is “one of the best persons” he has met.

“I have grown up idolising him and am privileged to know him personally. He’s one of the best persons I have met. He has served his country (Oman) with great honour and has provided great services. I wish he excels further in his career.”

“I met him when we came here in 2015 and I’d be glad to see him once again tomorrow. I wish him all the luck for tomorrow as well,” Gurpreet concluded.

Oman head coach Erwin Koeman warned his team that India will come with their strategies and can “make (us) pay a price”.

“We know India’s strengths as well as weaknesses. We don’t need to focus on them. Rather, we need to work on our strengths. They are a team that can make us pay a heavy price if we don’t do our work properly.”

Meanwhile, seasoned midfielder Raed Ibrahim Saleh is ruled out of Tuesday’s game owing to an injury.