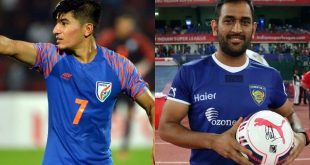 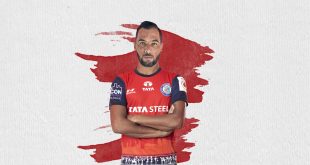 Bengaluru FC stormed back on top of the Indian Super League table with an emphatic 3-0 win over top-four contenders Odisha FC at the Sree Kanteerava Stadium in Bengaluru on Wednesday. New signing Deshorn Brown (23′), Rahul Bheke (25′) and Sunil Chhetri (61′ pen) were on target in a performance that was the perfect response to the defeat Bengaluru FC had suffered away to Mumbai City FC just four days earlier.

The win took Bengaluru FC to 25 points, one more than both ATK and FC Goa who have a game in hand and will be in action later in the week.

Consistent with the eleven that he rolls out to start the game with, Cuadrat made as many as three changes from the side that went down to Mumbai City FC last week. Jamaican striker Deshorn Brown and young midfielder Suresh Wangjam were handed their first starts in a blue shirt, while Udanta Singh – who came off the bench in the last two games – got the nod ahead of Ashique Kuruniyan.

Brown had an early chance to announce his arrival with bang, but he couldn’t get a clean shot on goal after Udanta had done brilliantly well to send in a cross in the 15th minute. But the striker had his moment soon after when he got a foot to Erik Paartalu’s header from a free kick to make it 1-0 in the 23rd minute.

Before Odisha FC could regroup and respond, Bengaluru FC hit them with a sucker punch, this time from a corner, two minutes after landing the first blow. Playing it short this time, Dimas picked Udanta who cut in, drove ahead and sent a cross that Paartalu smashed goal-ward on the volley. The ball came off Aridane Santana and fell to Bheke who reacted quick enough to hit home from close and make it 2-0.

Rocked by the two quick goals, Josep Gombau turned to his bench and rang in a double change with only thirty minutes of the game done. The Spaniard brought on Seiminmang Manchong and Diawandou Diagne for Santana and Marcos Tebar as the hosts saw through the rest of the half without more damage than had already been done.

Bengaluru FC began the second half with even more command and Brown, who was outmuscling his markers with relative ease, came close on two occasions – scuffing his shot the first time and then shooting just inches wide, minutes later.

Cuadrat made two substitutions of his own, pulling off Bheke and then Brown for Nishu Kumar and Ashique as the Blues went about in search of a third. The Blues then quelled any chance of a comeback after Chhetri scored what was his seventh goal in six games with a spot-kick just past the hour mark. With Dimas ready to send a corner into the box, referee Kasimov Sherzod spotted an infringement as Martin Perez bundled Paartalu over, and promptly pointed to the spot. The skipper made no mistake, sending the ball far past the reach of Arshdeep to make it 3-0 with half an hour left to play.

Bengaluru FC closed the game down without fuss as Cuadrat rang in a final change, sending on Kean Lewis to replace Wangjam with minutes left to play. The Blues next face Hyderabad FC at the Kanteerava on January 30.