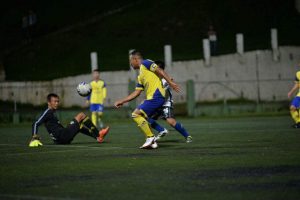 Last season’s finalists, Bethlehem Vengthlang FC got off to a great start with a 2-1 victory over Chanmari West FC in the second match of the day at the Lammual Stadium in Aizawl.

Both teams competed with an all-Mizo line up and entertained fans with a lively affair.

But it was Bethlehem Vengthlang FC who showed their ruthless streak when Lalrammawia finished off a move from Vanlalthanga in the 27th minute.

Chanmari West FC then introduced Lalromawia and reshuffled their pack and it bore immediate fruit as they equalised through Lallianzama 10 minutes from half-time.

Bethlehem Vengthlang FC changed shape when one of their new signings B. Zoramthara entered the fray in the second half, and they looked a much more threatening outfit. They finally retook the lead when Vanlalthanga found the net on the 62nd minute.

Chanmari West FC searched for an equaliser late on and came close through Lianzama but ultimately it was Bethlehem Vengthlang FC who held on for maximum points.