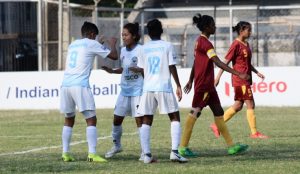 Sethu FC produced a brilliant performance against a hapless SSB Women FC, as the Tamil Nadu based side engineered a 8-1 victory at the Guru Nanak Stadium in Ludhiana on Monday. This win sends Sethu FC into the Indian Women’s League Final, where they will face Manipur Police.

Sabitra Bhandari netted four goals to take her tournament tally up to 13 from six appearances, but it was Dangmei Grace, who stole the show with her display from the right wing, as she scored a hattrick and made a couple of assists to take the Player of the Match Award.

SSB started off the game with a higher tempo, laying a proverbial siege on the Sethu FC penalty area. They created plenty of chances in the opening exchanges, but failed to capitalise on them, something that cost them dearly later on.

It did not take Sethu much time to capitalise on the early missed chances by SSB, as Dangmei Grace put them in the lead within the first quarter of an hour. The India international was on form in the second semifinal of the day, as she created the chance that led to the second goal, as she put in a low cross from the right that was finished off by Nepal international Sabitra Bhandari.

Grace soon added a third on the stroke of half-time, to make it a convincing lead for Sethu FC as they headed into the tunnel.

It was much of a cat-and-mouse game in the second half, as SSB pressed forward, looking to reduce the deficit, but Sethu kept hitting them with swift counter-attacks.

Grace scored one a few minutes after the restart, while Sabitra Bhandari scored two more as both the India and the Nepal internationals completed their hattricks, before Dular Marandi pulled one back for SSB. However, Ratanbala soared up the pitch from the restart and immediately restored Sethu FC’s six-goal cushion just a minute later.

This massive win means that Sethu will join Manipur Police in the final on Wednesday, May 22 at the Guru Nanak Stadium in Ludhiana.