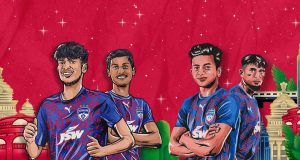 Bengaluru FC have announced the signing of four promising youngsters, in their bid to strengthen the core of the squad ahead of the upcoming 2022-23 season. Local boys Sudheer Kotikala and Ankith Padmanabhan, who represented Karnataka in their run to the Santosh Trophy semifinal, have signed two and three-year deals respectively. Joining them in the Blues’ roster are Clarence Fernandes and Felixson Conny Fernandes, who were scouted from the JSW Youth Cup, and have signed three-year deals.

“We have had our scouts at several Santosh Trophy games these last few seasons, and Sudheer and Ankith’s names have come up as two of the brightest players, on multiple occasions. We believe that they have what it takes to develop and become potential first-team players for Bengaluru FC and as a club, it is important that we give the right opportunities to deserving local players as we look forward to the future,” said club CEO Mandar Tamhane.

Through their recently concluded JSW Youth Cup, which was held in three different age groups at the JSW Township in Bellary, the Blues scouted two more youngsters in defenders Clarence Fernandes and Felixson Fernandes. While Clarence turned out for Dempo SC U-18s, 19-year-old Felixson was in action for Reliance Foundation Young Champs and also played in the Reliance Foundation Development League, helping his side to a fifth place finish. He has previously represented the youth teams at Churchill Brothers and FC Goa.

“The JSW Youth Cup presented us the perfect opportunity to scout for talent, and I am glad that our coaches have used that platform to bring in two very talented youngsters in Clarence and Felixson. They were standout performers in their respective teams when we watched them, and I am sure that under the guidance of our youth coaches, they can take the next step and knock on the doors of our first team,” added Tamhane.

While the Blue Colts are off to the UK to take part in the PL Next Gen Cup by way of winning the Reliance Foundation Development League earlier this year, the Bengaluru FC first team are set to regroup for pre-season later this month, ahead of the 131st edition of the Durand Cup.