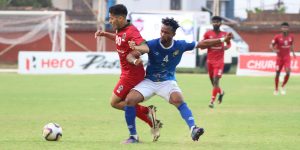 After a week filled with incredible goals, and also many of them, the dust settled down and a goalless draw arrived. For Churchill Brothers, this was confirmation that one swallow does not make a summer. Their five-goal tutoring of Rajasthan United FC in Fernando Varela’s first game in charge seemed like the charge of a new dawn, but the hard reality has hit them hard, and at home no less.

Mehrajuddin Wadoo’s men can at least take heart from the fact that coming off a 0-2 defeat to Gokulam Kerala FC they managed to salvage a point here. It will be difficult for Churchill Brothers’ coach to digest the fact that the team which pumped in five goals past Rajasthan United in an away fixture just last week, could not score even once against Real Kashmir — notoriously terrible travellers this season. But it also lays bare his challenge.

The Snow Leopards’ only away win of the season came way back in November when they beat NEROCA FC 1-0 in Imphal. But today, Loken Meitei could have given them the lead straight after the kick-off today when Jestin George’s long throw-in from the right fell on his right foot, with just Churchill Brothers goalkeeper Albino Gomes to beat. Meitei shot well over the bar.

That was the closest Real Kashmir came to scoring in the entire match. The Churchill Brothers midfield, led by Afghan international Sharif Mukhammad, had a good day once again leaving scraps for Real Kashmir’s forwards Ibrahim Nurudeen and Jerry Hmar. Jerry led good attacks from the right for Kashmir, but the Churchill Brothers defence consisting of Hero of the Match Gogou, captain Momo Cisse, Ponif Vaz and Vanlal Duatsanga gave Nurudeen very little space to move.

Churchill Brothers’ first attempts arrived in the 21st minute as they fashioned not one, but two chances in the space of a few seconds. Ghanaian forward Emmanuel Yaghr unleashed a menacing pile-driver from a way out and Real Kashmir goalie Subhashis Roy Chowdhury flung himself to his left, managing to keep it out with some help from the upright. Anil Gaonkar pounced on the loose ball and played in Alocious. Alocious’ cross fell to Emmanuel at the far post, but the Ghanaian shot high from a few yards away.

Churchill Brothers’ inability to score was in part due Abdoulaye Sane’s forgettable day on the pitch. Unmarked in front of the goal in the 30th minute Sane headed Alocius’s perfect lob in the wrong direction. He got another chance 12 minutes into the second half, from the cut back by Emmanuel, but sent the left-footed way over the bar. Valera replaced Sane with Uruguayan Martin Chaves late on but even that did not bear fruit.

Churchill Brothers got a lucky break in the 80th minute to settle the issue. Midfielder Kingslee Fernandes, who had a fine match, shot hard from outside the box and Roy Chowdhury could only watch as the ball ricocheted off his chest and into the path of Kapil Hoble. Before Hoble could tap it in though, Richard Agyemang slid in brilliantly to clear the danger.

The draw means Real Kashmir are fourth on the table with 19 points from 13 matches. Churchill Brothers are seventh, two points behind.