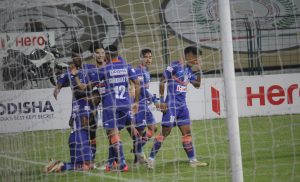 A daring performance by the Indian Arrows led by Ahan Prakash, the youngest captain ever in the I-League, saw the Shanmugam Venkatesh-coached side inflict a 3-0 defeat on NEROCA at the Kalyani Municipal Stadium on Saturday, March 6.

Harsh Patre netted a goal in each half, while Vanlalruatfela struck one in the second half to complete the victory for the Indian Arrows. To add to that, some great handy work by skipper Ahan between the sticks aided the Indian Arrows bag their second win of the I-League season. Meanwhile, trouble continues to brew for Gift Raikhan’s NEROCA as they have won just once in their last nine matches and find themselves in the relegation spot.

The Indian Arrows had lost 0-4 to NEROCA in their earlier clash this season, but this time the young boys took the game to the Manipuri side, matching blow for blow against the seasoned opponents. It was the Indian Arrows that started the match on an attacking note in an attempt to take the early lead. It felt like the Arrows reserved their best for the latter stage of the season as tacky work with possession continued to give NEROCA trouble.

The breakthrough came for the Indian Arrows in the 17th minute when a delicious cross from the right flank was headed with thunderous power into the back of the net by Harsh Patre. Patre’s goal was something out of a highlights reel as he was positioned near to the edge of the box.

While the attack did their job in handing the Indian Arrows the lead, the defence did theirs shortly after. Led by Ahan, who seemed to be in inspired form, made multiple saves in quick succession to deny NEROCA from close range in the 21st minute. Both Judah Garcia and Songpu Singsit were left out of words as the shot-stopper pulled off some miraculous saves in a matter of seconds.

In the 36th minute, NEROCA only had themselves to blame. Judah Garcia went clear onto goal and with only the opposition goalkeeper to beat, but put the ball wide of the goal. Shortly after, Vellington Fernandes made a goal-line clearance to deny NEROCA once again. The half-time scoreline read 1-0 in favour of the Indian Arrows.

NEROCA were quick to start off the blocks in the second half but the Indian Arrows spoiled their party once again in the 51st minute and left them reeling two goals down. A Taison Singh shot from distance was parried straight into the stride of Vanlalruatfela by the opposition goalkeeper, and from a tight angle, the forward toe-poked the ball into the net to make it 2-0 for the Indian Arrows.

The second goal knocked the stuffing out of Gift Raikhan’s team and their attacking play which already looked lacklustre in the first half went amiss on multiple occasions. Despite dominating possession, chances came rarely for the Manipur-based club. In the 68th minute, Nathaniel Garcia tried to put NEROCA back into the game as he attempted a shot from long-range that went inches wide of the goal.

NEROCA tried to come back into the match, but the Indian Arrows defence thwarted them with ease. Even after Gift Raikhan had made attacking changes in the form of Varun Thokchom, the Manipur-based club seemed to run out of steam in the second half.

While the result looked done and dusted with the clock running down, the Indian Arrows had one last goal up their sleeve. A loose back-pass meant that NEROCA’s substitute goalkeeper Golmei Dihempu Rongmei had very little time to control the ball, and was eventually dispossessed by Harsh Patre, who took his sweet time to trickle the ball over the line, with the NEROCA penalty area completely empty. Soon after, the referee brought the game to an end, as the Indian Arrows sealed their second victory of the season.

The defeat heaped more worries on Gift Raikhan’s side as NEROCA now has to aim to win their remaining three games and hope other fixtures go in their favour if they are to survive the drop. Moreover, with Chennai City FC losing earlier in the day, the relegation battle now seems to be heating up.