India U-15 Girls’ Alex Ambrose: Need to stick to our plans against Bhutan! 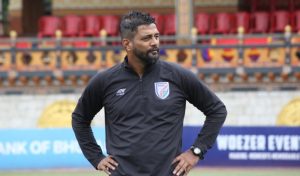 After collecting the three points from Nepal in the opening game, head coach Alex Ambrose looked ahead to their next clash against hosts Bhutan at the SAFF U-15 Women’s Championship at the Chalimithang Stadium in Thimphu on Friday, October 11. He spoke about the need to keep working in the same manner and “sticking to our plans”.

“It’s up to us to work on our own technique, get in focus and stick to our plans, rather than focusing on what Bhutan are like,” he said.

He talked about the “fighting” nature of the Bhutanese side, saying, “Bhutan is a team that keeps fighting. I saw them playing and also saw the players, they don’t give up.”

To add to that, Bhutan will be playing at home, with the support of the crowd behind their back. However, Ambrose believes that his girls need to stick to their game and push through.

“Bhutan obviously will have the backing of the home crowd here, but that is something that all players have to deal with all over the world, in almost any sport,” quipped Ambrose. “Of course having the crowd behind your back helps, but we have to make sure that we stick to our plans and play our game,” he added.

Bhutan will come into the match on the back of a 2-0 loss against Bangladesh on the first matchday. On the other hand, India started off their SAFF U-15 Women’s Championship with a 4-1 victory over Nepal, a result that has perhaps been aided by the fact that the team had arrived in Thimphu a week ahead, in order to acclimatise with the frosty conditions in the Himalayan nation.

“Football is all about the team that creates a lot of chances and I believe in taking those chances, and scoring those goals,” said Ambrose. “This was our first match which was always going to be difficult. Acclimatizing to the conditions also helped us a lot, but I am sure they will do better in the rest of the matches.”

The match between India and Bhutan at the Chalimithang Stadium in Thimphu is scheduled to kick off at 5.30pm IST and can be streamed live on Mycujoo.tv.