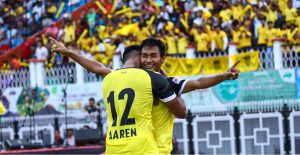 Hyderabad FC kicked off their 2022-23 season with a comfortable win in their Durand Cup opener against TRAU FC at Khuman Lampak Stadium in Imphal on Monday, August 22.

Halicharan Narzary (17′) and Borja Herrera (52′) scored two-long range screamers as Hyderabad got off the mark in the 131st edition of the prestigious competition. This win takes Hyderabad to second in the points table in Group C.

Manolo Marquez named five debutants in the Starting XI for the game, with the likes of Manoj Mohammad, Borja Herrera, Alex Saji, Lalchungnunga Chhangte and Lalbiakhlua Jongte all starting a game for the first time in Yellow and Black.

TRAU FC looked dangerous at the start of the game with Biaka called into action on a couple of occasions but it was Narzary with a banger, that drew first blood on the evening.

The speedster was quick to latch onto a loose ball, yards outside the box and let one fly with his right foot which left the TRAU FC keeper scampering. The shot found the top corner as Narzary became the first player to score a goal for Hyderabad FC since he himself converted from the spot in the Indian Super League final last season.

After the goal, Hyderabad FC took charge of the game and came close on a couple of occasions before the break.

Manolo Marquez decided to change things up and on came Javi Siverio for Aaren and Hyderabad FC proved too strong for the local side after the restart.

Borja Herrera joined the party just seven minutes after the whistle, as he controlled a cross from Yasir on the right, and hit a half-volley from outside the box, that found the top corner.

Hyderabad FC managed to keep up the pressure on TRAU FC, as the likes of Joao Victor, Hitesh Sharma and Chhangte were unlucky to hit the woodwork.

Bart Ogbeche, who came off the bench and Javi Siverio missed a couple of decent chances but Hyderabad FC dominated the half and ran away with a 2-0 win.

Fullbacks Manoj Mohammad, Nikhil Poojary and Abdul Rabeeh, who was subbed on, were also effective throughout the game but it was the midfield masterclass from Hitesh Sharma that saw him named the ‘Player of the Match’ on the evening.

Hyderabad FC are back in action when they take on Chennaiyin FC on Friday, August 26 at the Khuman Lampak Stadium in Imphal.

As XtraTime reports, the reserve side of Kolkata giants East Bengal Club are ready for …