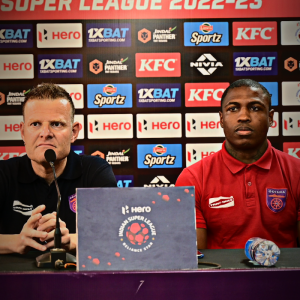 Josep Gombau and Diego Mauricio attended the pre-match press conference and briefed the media ahead of their game tomorrow against Mumbai City FC.

Game of fine margins against the Kerala Blasters. Key learnings from that game according to you…

Josep Gombau: I think the team played really well in the last game in Kochi. We dominated the first half and created a perfect chance that we didn’t convert. In the second half, Kerala came into the game and took the lead. The team struggled a little bit physically in the second period. It was very hot and humid, we are not used to playing in conditions like this. The minute details decided the game.

The team is performing well, especially against ATK Mohun Bagan and also in Kochi. The only thing that is missing is scoring goals. What are your thoughts on that?

Josep Gombau: I agree with you on this. If we don’t create chances to score then I’ll be worried but against KBFC we didn’t create much. We have worked hard in training this week especially by asking the players to take better decisions during the game in the final third. I think we have a very good set of players like Diego. There’s a sense of belief in the team and we will start scoring from tomorrow and get a good result as well.

Mumbai City FC have been in good form this season but also considering the fact that Odisha FC has a very good home record. How do you intend to go about tomorrow’s game?

Josep Gombau: Mumbai City is a very good team. They are a team that scores a lot of goals. We have been working in training and also analysing the way they play. The boys know what they need to do to hamper Mumbai’s efforts tomorrow. With all due respect to Mumbai City, it is our job to make it difficult for them at our home. We will try our best to win the game and that has been our mentality from the very start.

You are going up against your former team. What are your thoughts on the game?

Diego Mauricio: The game is going to be difficult but we know what we have to do tomorrow as a team. This week the training has been really good for us. The intensity is good and the mentality inside the dressing room is to win tomorrow. The coach has a game plan and we are going to try our best to execute it on the pitch.

You have been an exceptional player for the team and in the league as well. The fans love you as well. What do you have to say about the support you have received this year in Odisha?

Diego Mauricio: The fans have shown me a lot of love since the time I have been here. It is my duty to pay them back with goals, I am really motivated to prove myself this year. The team is special and we can go on to achieve great things. Keep supporting the team whenever we play at home and we will try our best to give you back good results.